DynamoRIO is a system for runtime code manipulation that is efficient, transparent, and comprehensive, able to observe and manipulate every executed instruction in an unmodified application running on a stock operating system and commodity hardware.

DynamoRIO operates in user mode on a target process. It acts as a process virtual machine, interposing between the application and the operating system. It has a complete view of the application code stream and acts as a runtime control point, allowing custom tools to be embedded inside it: 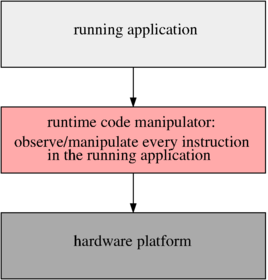 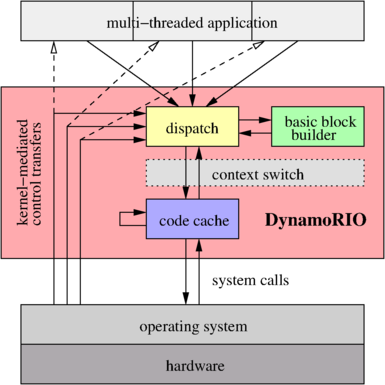 DynamoRIO copies the application code one dynamic basic block at a time into its basic block code cache. A block that directly targets another block already resident in the cache is linked to that block to avoid the cost of returning to the DynamoRIO dispatcher.

Frequently executed sequences of basic blocks are combined into traces, which are placed in a separate code cache. DynamoRIO makes these traces available via its interface for convenient access to hot application code streams.

The following figure shows the flow of control between the components of DynamoRIO and its code caches:

The context switch is between DynamoRIO's operational state and the machine state of the application: both are still within the same process.

Indirect branches require dynamic resolution of their targets, which is performed via an inlined table lookup or a compare to a known target inlined into a trace.

Transparency is an important requirement for DynamoRIO and its clients. The subject is fully covered in Client Transparency.

The canonical reference for DynamoRIO is: